Mare’s film, “The Paper Boat” won Best Music Award and also the People’s Choice Award at Blue Shorts Film Festival on Saturday night.  22 finalists’ films were enjoyed by a full house and the overall winner was “Old Hand” by Benjamin Mair.  This festival, in it’s third year, is run by volunteers and is screened in the nostalgic cinema of yesteryear: Mt Vic Flicks.

The Paper Boat stars Tessa Mckay in a warming performance featuring two of her talents: violin and painting.

Katoomba Flamenco guitarist, Bernie White, added to the soundtrack of the film with inspired guitar improvisations to convey the feeling of the film.

Thanks to everyone who supported this heart-felt flick about remembering to live your dreams.

pics from top: A full house at Mt Vic flicks, some of the cast and crew of the boat, Mare & Co-Director “Nellie”, the “Blue Shorts” trophy. 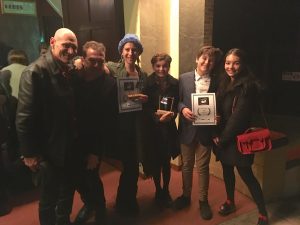 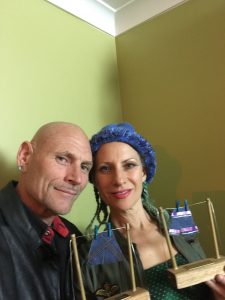 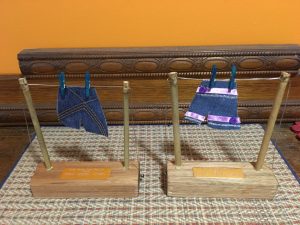